We’ve made it from your connection to Edmonton, now the data is outside of the MCSnet network and has to get to the different servers around the world connecting to the Internet. The Internet is a patch work of interconnected networks, and the data will take the shortest (fastest) route to get to the destination. The speed of the connection still depends on the responsiveness of the route.

If you are connecting to major services like Google or Microsoft, they are more likely to have direct and large pipes to their data to provide fast and uninhibited access. For example, opening a youtube video, which is a google service, will in many cases hit a cache in St. Paul, or go through a larger fibre almost directly to a major Seattle data center. Alternatively, if you go to a smaller site hosted in the UK, it has to make it through a few networks in North America before going through the undersea cables, and through their local providers feed, which will be more susceptible to latency and limited bandwidth and peak time issues. Even the major sites are not immune to issues, denial of service (DOS) attacks to overload networks and servers are common, and services like playstation and xbox are still going down during busy holiday times when more people are using it. 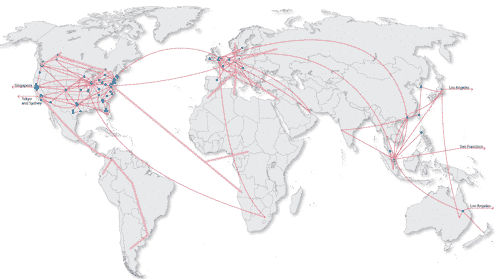 Here are some practical examples of speed or performance issues, how the subscriber was able to diagnose them, and if possible, how the issue was resolved.