Here are some practical examples of speed or performance issues, and how the subscriber was able to diagnose them, and if possible, resolve the issue.

By the Betterment of Broccoli

Sue has an interesting problem. She takes an online class in the afternoon, and almost every afternoon, like clockwork, she loses her internet connection to her laptop for a couple of minutes. On her laptop, she can see in the bottom right corner where the network icon is showing the Wi-Fi dropping, and then it comes back on its own. When it is on, the signal is strong at 5 bars.

As a test, one day Sue buys a 50 ft patch cable and strings it to her bedroom to her laptop to see if the problem still happens with a cable. Sue watches the network icon as the time approaches, she notices that she still has 5 bars, and then, sure enough, the bars disappear, but it’s different this time; it changes to an icon with a computer with a cable on it. Sue realizes that her laptop was still connecting to Wi-Fi even though she had plugged the cable in, but when the Wi-Fi dropped out like it has been doing, it changed to the cable and her connection to her online class didn’t go down. Sue now knows that it’s the Wi-Fi that’s the issue, but she’s not sure why; it’s not like there’s any large objects being moved around; only little Mikey is home and he’s just watching cartoons. Sue tries rebooting the router, but it still happens, so she resigns herself to make sure she has that cable plugged in at that time, and considers getting a powerline networking kit to avoid the trip hazard in the hallway.

Just a few days later Sue figures it out. As her connection goes from Wi-Fi to cabled and back to Wi-Fi again, she hears the faint beeps of the microwave. Turns out that little Mikey has been microwaving a pizza pocket after he gets home from school and watches ninja turtles. The microwave cuts out the Wi-Fi while it’s running. Sue fixes the issues by switching Mikey to an all broccoli diet.

TLDR: Microwaves zap Wi-Fi in the surrounding areas while they are running.

Carol is having a problem with her internet connection. She opens up Internet Explorer to get on Facebook, but the page seems very slow and never finishes loading. After a reboot of her router doesn’t help, Carol decides that something must be down and leaves it alone for a bit. Shortly after, she gets a call from her friend who also uses Facebook. She suggests trying a different browser, like Chrome or Firefox, since it worked for her before.

As Carol tries the suggestion, she realizes that she can’t search and download Chrome or Firefox without the connection working, but she notices that she already had Chrome installed. When she opens Chrome, the Google search page comes up right away. Awesome, she’s back online, and she will have to thank her friend! Except, once again when she tries Facebook, it slowly loads the top part of the page before stalling again! Is it just Facebook? Carol goes back to the Google search and tries searching for ‘is Facebook down’ and once again the Google result comes back right away, indicating that the internet is working. Instead, she sees news about a major outage at Facebook. She just had to try a different site—it was just Facebook.

TLDR: sometimes websites go down; you can search for news about the major ones like Facebook or Gmail.

Willie loves to binge watch TV shows. Gone are the days of watching a show piece by piece, when he can spend an afternoon getting lost in the third season of The Wire, episode after episode over the internet. Cliffhangers be gone! The problem is that somewhere around 8:00 p.m. to 11:00 p.m., his video stream stops to buffer and interrupts the show every few minutes. A support person tells Willie just what he expected, it’s because the internet speeds can’t keep up to the video stream, and the later evening is the peak usage time when the speeds can be slower. He is also told about setting the playback setting in his Netflix account to low quality to that it requires less bandwidth. After making the playback adjustment, the Netflix stream works virtually uninterrupted in the evening.

TLDR: streaming video may be choppy if you don’t set the playback setting.

Vern lives in the basement of a shared household where he connects to the Wi-Fi on his upstairs neighbours’ internet. This works well when he is in his living room area, but he loses connection all the time when at his desk in his bedroom. When it drops out, he finds that if he goes upstairs and unplugs and re-plugs the power to the router it helps it to get going again, but sometimes only for a few minutes before it is lost again.

Vern decides to purchase a better router to help the Wi-Fi to his bedroom, so he picks up the latest and greatest for a couple hundred bucks and gets it all set up. A couple of speed tests show a definite improvement with the new router, but it still loses connection in his bedroom. After taking the new router back, the sales person suggests using a wireless repeater/extender to help bounce the Wi-Fi to his bedroom.

An exchange for a wireless repeater and a little bit of research on how to set it up has solved the problem. The repeater is in his living room area where it has a good signal to the router upstairs, and the signal in his bedroom is now rock solid.

TLDR: replacing the router doesn’t always solve Wi-Fi issues; you may need a Wi-Fi repeater/extender to reach all parts of your house. 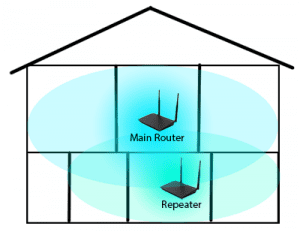 The main router sends the signal out in blue, and the repeater connects to it and rebroadcasts in green, allowing the bottom side room to have a signal.

Sue’s internet has slowed down. She has already tried connecting her laptop directly to the internet connection, but it’s no faster than through her router, so it must be the connection itself. It is later in the evening, so she figures it must just be peak usage slowdowns and decides to leave it for later. The next morning, Sue finds the internet is still laggy, and her speed test results are no better than last night, so she sends a message to MCSnet support to see if they can see anything wrong.

Support writes back that the connection has a stable signal and tests well, but that she has it set in the slower ‘unlimited mode’ after breaching the monthly usage cap. Sue doesn’t recall setting unlimited mode on, but other people use the internet at her place. After asking, she finds out little Mikey saw the internet cap page come up and clicked the button to use unlimited mode, he forgot to tell her because he was busy searching for broccoli recipes.

TLDR: if your connection reaches the monthly usage allowance, someone using it can enable the slower unlimited mode from the usage screen.

Previous sections in this guide....

Part One: Your Network

Your network is a good place to start since it’s where you have most direct control.

After the radio on your roof, the main parts of the MCSnet network are the access points (APs) on the towers that the subscribers connect to, tower to tower feeds, and the connection to the fibre for the region.

We’ve made it from your connection to Edmonton, now the data is outside of the MCSnet network and has to get to the different servers around the world connecting to the Internet.